Can I Use My Microwave? Well, I Wouldn't. Don't Compromise Your Health Just to Save 5 Minutes. 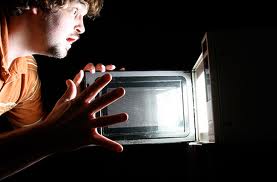 The question as to whether microwaves really are harmful to our health has been a hot button issue as of late. Studies come out showing the dangerous effects microwaves have on our food and bodies, and then studies come out to counter those studies (although who is funding the latter studies is always a good question to keep in mind). When it really comes down to it, microwave ovens are an experiment on public health that has not been around long enough, nor has enough funding been put into research to tell us for sure, if it is harming us. As far as I'm concerned, I'm willing to air on the side of caution on this one, and believe the numerous studies/experiments that have shown microwaves to be harmful to our health. And really at the base of it, something just kind of creeps me out about heating my food via radiation. Lets take a look at some of the studies that have been done over the years to back this up.

In an article by Dr. Mercola in May of 2010, he notes that we are not only what we eat (as the popular mantra goes), but just as importantly we are what we buy and how we cook what we eat! I love this statement because its so true...we can eat veggies all day long, but if they are coming from pesticide laden, nutrient depleted soil, and/or if we are scorching all the nutrients out of it on high heat with rancid oils, we might as well go on the twinkie diet. Ok, it wouldn't be quite that bad, but you get the idea.

On the subject of soil depletion, the calories we eat today do not have nearly the nutrient density as they did 100 years ago (or less). This is due to industrial farming practices rendering our soils void of essential nutrients. So as mentioned above, even if we eat a diet high in fruits and vegetables, we still need to get the most bang for our buck in terms of food consumption, which means preparing food in ways that will preserve the nutrients. Buying organic will obviously provide us with many more nutrients than conventional crops, however, can still suffer from nutrient-starved soil sometimes.

Microwaves work by causing the water molecules of food to resonate at very high frequencies, causing them to turn to steam and heat the food. In this process, however, the chemical structure of the food is also changed. Most of us are aware at this point of certain dangers of microwaves. We know never to heat breast milk in the microwave, one because so many nutrients are killed in the process, and two because microwaving does not heat evenly and causes "hot spots" potentially leading to bad burns (sorry, babies....thanks for being the test-group on that one). We also know not to heat foods in plastic containers (particularly fatty foods), due to the numerous toxins (BPA being the most commonly known) that leech from the plastic into our foods. Note: this also happens with other commonly microwaved packaging, like popcorn bags (lined with plastic), and other store-bought microwavable foods. Before a well-publicized law suit in 1991 when a woman died from a blood transfusion of microwaved-blood, we used to heat blood for this purpose, not realizing that it damages the blood's make-up.

Another argument that has been made is that microwaves leech radiation into our kitchens and homes. Although this was more of a problem with older microwaves and newer models have taken more precautions, it is still of concern. Consider this statement from Powerwatch, a nonprofit organization that has been heavily involved in the microwave debate:


Yikes. And keep in mind that the regulating body dictating the "safe" levels of microwave radiation to have in our homes is the FDA, and I for one do not generally trust their guidelines due to a long history meaningless standards stemming from corporate ties and affiliations. Keep in mind that our eyes are the most susceptible to microwave radiation, so do not stand up close to the microwave in order to prevent cataracts. There have also been some pretty convincing studies done on the effects of microwave radiation on high blood pressure and blood sugar levels in susceptible individuals. Watch this short video from the Center for Health Studies and Environmental and Research Studies: http://www.youtube.com/watch?v=gJcM6RZwyfA&feature=player_embedded

Now, the thing about microwaves that is of most concern to me is the area where the least amount of research has been conducted, that being how microwaves actually effect the nutrients in our food. In actuality, there has been numerous experiments done on this topic, but not much publication of results (again, look at the interests of the media/publicists). Among the numerous studies that have been done, I will just point out a few examples. The Journal of the Science of Food and Agriculture published a study in 2003 finding that broccoli zapped in the microwave lost 97% of its antioxidant value, rather than an 11% loss by stove-top steaming. A study of microwaving garlic for only 60 seconds showed that all of its primary cancer-fighting enzyme, allinase, was deactivated. A fascinating study done by a high school student was published in 2007, where the student watered 6 planted seeds for 2 weeks. Some were watered with tap water, others with distilled water, and others with microwaved water. The microwaved-watered seeds not only failed to thrive, but became moldy, rotten, and stunk. The others were healthy and vibrant.

And there is more. But again, for me, I'd rather heat my food the old fashioned way...without electromagnetic radiation. Like so many technological "advances" in our society, the dangerous health impacts are so often not actually proven beyond a doubt until it is to late. We are the test subjects of the great microwave experiment. If you agree, try using a toaster oven (or regular oven) on low heat (200ish degrees) for 20 or 30 minutes. Defrost foods overnight. Eat more raw foods. Don't take a chance on your health just for the sake of convenience. And hey, once your microwave is phased out, it can make some great extra shelf space.
Posted by Madrona Wellness at 9:45 AM