Article from my Professor in regards to GM Foods....a quote of mine at the end... 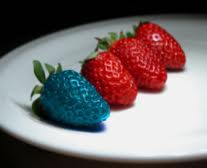 Last year, an article was written in the New York Times letting us all know that (whew!) GM Foods actually aren't so bad for us! Um...FALSE. I wrote a letter to the editor that did not get published (your loss, NY Times), but a professor of mine (Helayne Waldman) who writes a monthly blog in the SF Examiner did respond to the article and quoted my letter at the end. At least it was (partially) published somewhere! Check out the original article, then our responses. GMO...scary stuff, people!!

On Frankenfoods and Sick Cows

Two identical rats, 20 days old. Guess which one ate GE food?
Photo: saynotoGMOs.org
Yesterday (4/22), I reviewed a piece in the New York Times entitled “For Earth Day, 7 New Rules to Live by.” At first I thought the column was a tongue-in-cheek look at what Earth Day should really be about-- restoring Mother Earth to the strong, proud Mama she once was. NOT!
Here’s what I did see. “Frankenfood, the article states, like Frankenstein, is fiction. The imagined horrors of “frankenfoods” have kept genetically engineered foods out of Europe and poor countries whose farmers want to export food to Europe. Americans, meanwhile, have been fearlessly growing and eating them for more than a decade — and the scare stories seem more unreal than ever."
Really? Check out the work of Arpand Pusztai and Stanley Ewen who found that rats fed a GE diet developed impaired organ function, a slower metabolism and a less efficient immune system. Read Jeffrey Smith’s description (Seeds of Deception) of cows that broke through a fence and crossed a field to b pass GE corn so that they could eat the real thing from the neighboring farm. Be aware as well, that GE soy, ubiquitous in the American food supply, was developed in part to be able to withstand massive doses of Monsanto’s broad spectrum herbicide “Roundup Ready,” hence the quixotic name “Roundup Ready Soy,. ” This, despite the Times’ claim that GE crops “reduce the use of pesticides and herbicides”
Got rgBH?
It’s in dairy products that many of us may get our biggest dose of genetically engineered food. I was first introduced to the concept of genetic engineering in 1994’s, when the FDA approved rgBH, a genetically engineered growth hormone designed to force cows to produce more milk. From the Center for Food Safety and other researchers we know that cows that were fed this hormone also produced high levels of another hormone called insulin-like growth factor. By 1995 the National Institutes of Health had already identified several problems with these new, elevated levels of IGF-1 in the food supply, including an elevated risk of breast, lung and colon cancers, as well as a possible role in osteosarcoma, a relatively uncommon childhood cancer.
As for the cows, the hormone seemed to make cows much sicker, caused reproductive problems, mastitis, other infections and an alarming rise in birth defects. This forced farmers to use larger doses of antibiotics in their herds, which, of course, found and continue to find their way into our meat, milk, cheese, yogurt and even baby formula. Were these diseases and abnormalities looked into? Hardly. In fact, as author Barry Commoner informed us in his 2002 analysis of the “spurious foundation of genetic engineering,” (Harpers Magazine): “the biotechnology industry is not required to provide even the most basic information about the actual composition of the transgenic plants to the regulatory agencies.”
As you can see, it looks more like wisdom than squeamishness behind the rejection of GE foods by much of the civilized world. Is is just possible the animals, the Europeans, the New Zealanders, the Zambians and millions of others are on to something that we Americans are too blind, too brainwashed, or too distracted to notice?
While the research is not all said and done on GE foods, we might well learn from those who advocate a more cautious approach. As one of my Berkeley nutrition students Rachel Fiske observed:
“It is critical to realize that many studies against the organic movement are funded by the very individuals who stand to profit from the use of GMO. Have we as a nation learned nothing in recent years from the disturbing rates of growing degenerative disease and childhood obesity? The ‘imagined horrors of frankenfoods’ are far from imagined.”
I couldn’t have said it better myself.
Posted by Madrona Wellness at 8:24 AM