The Wonderful World of GARLIC!! 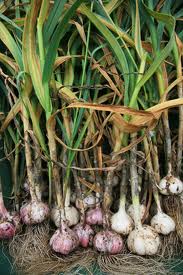 For those of you who have spent any significant time with me, you know that there is probably no other more appropriate topic for me to write about than garlic. I have many times been that weird girl at the table peeling and chopping up her own raw garlic to sprinkle over food, or simply eating a clove in the morning and washing it down with some apple cider vinegar in water. I know what you're all thinking....YUM!! Now, some people might worry that they'll smell like garlic, it will seep out of their pores, etc...but come on people!! Who doesn't like smelling garlic?? So let me now convince you to overcome this minor inconvenience with its myriad of impressive health benefits....


First, a brief history. Garlic originates in central Asia, where it has been grown for over 5,000 years. It has been used for centuries throughout many different cultures for both sacred and practical purposes, and was even given to the slaves building pyramids to increase their strength and endurance. Similarly, it has widely been used over the centuries for athletes before sporting events and soldiers before going off to war (whfoods.com). These are just a couple of endless examples of garlic's long history of being a "miracle food" some might say (like me).


So what makes it so special? Well, let me tell you. Garlic is nature's most potent antibiotic, being part of the allium family due to its many sulfur containing compounds which give it so many of its health benefits. It combats viruses, bacteria, and intestinal parasites. It also lowers blood pressure, blood cholesterol, discourages blood clotting, contains multiple anti-cancer compounds, antioxidants, is a great decongestant, expectorant, anti-inflammatory agent, and the best immune booster/cold medication on the market. According to studies, two to three cloves a day cut the odds of subsequent heart attacks by 50% in heart patients (Ed Bauman, Ph.D.). Check out this chart from whfoods on some of the major vitamins/minerals/nutrients found in garlic: 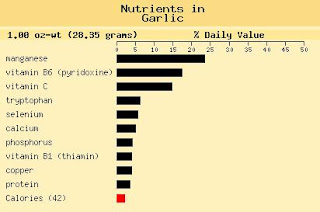 Wow! Thats a lot of good stuff, people. These nutrients along with other compounds are what make garlic such a powerful anti-viral, anti-bacterial agent, as well as its ability to combat cardiovascular disease, yeast/fungal infections, ulcers, cancer, and more.
So...whats the best way to eat it, now that we're ALL about to rush to the nearest (organic) grocery store? Well, garlic is undoubtedly most potent in its raw form. As with any food, heat kills some important nutrients (vitamins, in particular, minerals can withstand heat), and so you are losing some of its benefits. Try 1-3 cloves/day, chopped/crushed over salads or other foods. If you can't handle it raw, add chopped/crushed garlic to foods as you are cooking, but try adding it at the end to preserve as many of its healing compounds as possible. When eating it raw, the best way to preserve these same compounds is to crush it and let it sit for about 10 minutes before eating.
Well, there it is, why I am addicted to garlic. Not a bad addiction to have. Eat up!!!
Posted by Madrona Wellness at 9:14 AM